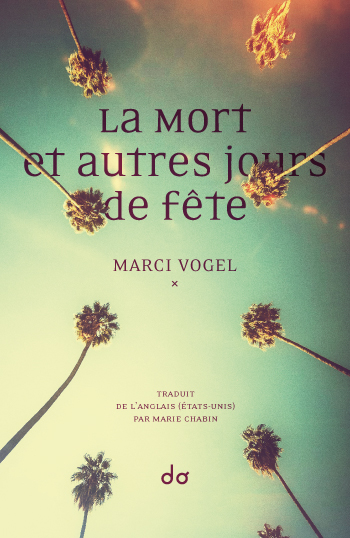 Titre original : Death and Other Holidays

View this publication on Calaméo
Publish at Calaméo or browse the library. 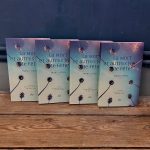 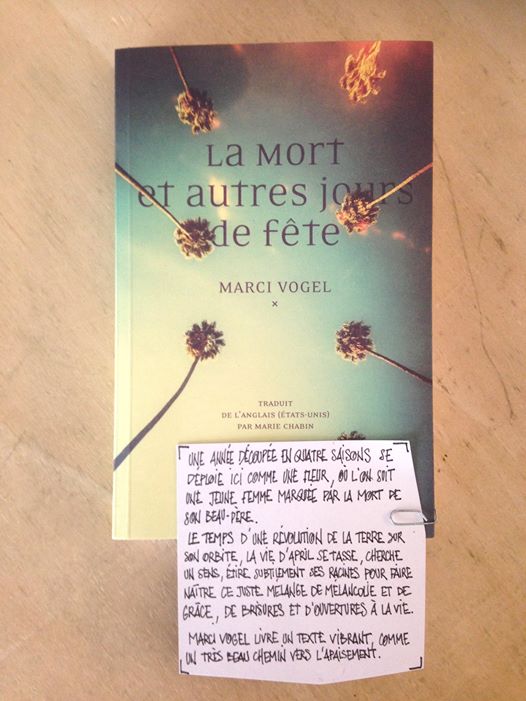 « It will come as no surprise to readers of Marci Vogel’s Death and Other Holidays that her first book, At the Border of Wilshire and Nobody, was was a work of poetry. The opening stanza of one poem in the collection, “The Mapmaker Is Revealed to Be a Woman” – a marvelous title if ever there was – reads:

We were navigating the sad, pulling branches off trees with chainsaws

did not know where to go in the chaos.

Her most recent work, Death and Other Holidays, however, is a novella. A novella that could easily be described as being about navigating the sad. Despite the centrality of death to the book, its tone is more poignant and affecting than mournful and depressing. It’s the sort of prose that may make you cry (at least it made me cry) but over its lyrical beauty and spot-on turns of phrase rather than the tragedy of what has taken place. Indeed, Vogel portrays death with what often seems a light touch. Here, for instance, is the way the protagonist notes that her father committed suicide: “He hanged himself the year I turned sixteen. He left me his Datsun B210 hatchback, and it was months before I learned to operate the clutch without stalling.” Months that were, no doubt, spent navigating the sad, but which are left to the reader to imagine: no further detail provided. Her style is spare and unaffected, often with a dash of wry; no superfluity here. Both narration and dialogue come off as conversational, casual, off-handed, so natural as to be effortless. Yet as Mark Polizzotti notes in his outstanding book Sympathy for the Traitor, “Even . . . snatches of natural-sounding dialogue . . . are the product of many weighed choices, of phrasings discarded, reinstated, and discarded again. Making something look effortless is hard work.” Although Polizzotti is writing, here, of translation, the effort required in order to render fiction from one language into another, his statement holds equally true for monolingual creative writing, be it poetry or prose.

The protagonist of Death and Other Holidays, the vernally-named April, has recently lost Wilson, her mother’s second husband, with whom she had what was clearly a deep and genuine relationship. She narrates for us one calendar year from the time from his death, from Spring 1998 to Winter 1999; the book is divided into four sections of a season each. And thus, it is Spring when we meet April in her cruelest month, coming to terms with her recent loss. “[A]nyone I’ve ever known who’s died,” she says, “they died in the Spring.” Over the course of this season, April provides small snapshots offering glimpses into the type of man Wilson was, simple vignettes, stripped of detail, chronicling everyday life. “Wilson’s family were Petaluma poultry farmers, which is how Wilson learned to candle an egg, see if it was viable”. She recalls her stepfather with constant and understated affection, revealing the intensity of their emotional bond while eschewing the mawkish.

Here is a stanza from Vogel’s poem “Studying Abroad in the Country of Love”:

When I was a girl, I had a crush on Lincoln, all sad eyes and stooped shoulders. I thought I could heal him, heal the whole country of sad.

In Death and Other Holidays, it seems to me, April navigates the sad but also unconsciously heals it over her four fin-de-siècle seasons. This she accomplishes not by burying it, or via epiphanic moments and symbolic acts providing “closure” but simply by carrying on inexorably, like time.

One of many finely crafted aspects of this novella is its hazy yet undeniable locatedness. While not emblematic of Los Angeles with the intensity or granular specificity of Issa Rae’s Insecureor Jonathan Gold’s restaurant reviews, Death and Other Holidays embeds itself deeply in Los Angeles throughout. April, for example, works as a “curatorial assistant” at LACMA, “…the county museum, which sounds more glamorous than it is.” On her lunch breaks, she often “take[s] a walk around the park, look[s] at the tar pits, all the dinosaurs stuck in the black, sticky ooze.” She lives half an hour from the beach and goes to Ballona Creek and Solstice Canyon. LA is not an ever-present character, but a cogent backdrop, reliable and cohesive, providing touchstones (e.g. the See’s factory on La Cienaga) for readers familiar with the landscape and texture for those who are not. Rather than winks to Angeleno insiders that leave others out in the cold, Vogel provides a window through which everyone can glimpse April’s world on both emotional and geographical levels.

The book won the 2018 Miami Book Fair / de Groot Prize, which the back-cover notes is “the only American literary award honoring the novella” and might push the envelope of what we tend to think of as a novella. Each season is divided into chapters (for lack of a better word); some are several pages, others six or seven lines. And at times it seems that tabs and line breaks are the only thing differentiating them from prose poetry, the sort reminiscent of William Carlos Williams. Here, for instance, is the chapter entitled “Space” in its entirety: “After Wilson died, my mother started sleeping on his side of the bed so she wouldn’t see the empty space where he used to be. He always took the left, like where your heart is inside your body, farthest from the door. It was late one Sunday morning when I walked in and saw her sleeping there.” The title “Space” functions as a little capsule of polysemy: it may signify the void left by the fact that Wilson is no longer around; the place of honor that was reserved for him; even the space between April and her mother, who seem not to speak of his death, to each mourn in isolation. This is the case with nearly every chapter title: they refer to a concrete object or issue in the story, but also resonate on a deeper metaphorical level (or three) and struck me as tremendously thoughtful, as literally painstaking. Clutch, By Accident, Balance, Anchor, Patrimony, Dark Room and Rest Stop are just a few of many examples.

While Spring, for April, is the season of death, her Summer opens with resurrection, via a reflection on June bugs, “which don’t show up until July.” April’s best friend Libby has a dog named Argos who “snaps at them until they fall on their backs. Then he paws them right-side up and they fly away like they were never dead.” Throughout the season, April’s romantic life (if not “love” life) has something of a resurrection as well; she dates men including “Math Man” and “Leaf Man” while seeming to remain detached, not aloof, simply not invested. “Wilson told me once that in every couple there’s always one who loves the other just a little bit more. ‘Don’t worry, April,’, he said, ‘you’re the image of your mother. It won’t be you.”

Winter is surprisingly cold in Los Angeles, “those old stucco buildings are constructed like Lego sets, no insulation and no weather stripping.” But rather than hibernate in this season, she grows. April makes recipes out of Sunset Easy Basics using vegetables from the garden in “Rooted” and may put down a few emotional roots of her own as well. Literally and metaphorically, the season Is filled with not only ashes but seeds, things growing in addition to dying.

In the end, Death and Other Holidays is reassuring, both to readers and April, who find solace in its solid, tangible realities. The concrete presence of pick-up trucks and See’s Candy, rhubarb and garbage disposals (with their “familiar sound of spoons grinding up”) is comforting, as is the notably freeing lack of technology. Only at the end of Winter, when we are, of course, on the brink of the what was called Y2K, is the encroachment of the digital world hinted at. In the very last chapter, April hears a report on National Public Radio about a “tiny instrument…called a Global Positioning System. Apparently…these satellites in the sky…figure out all the math and then tell you where you are. I don’t know how this would help a person, exactly. I already know where I am, and I’m not in Hawaii.” And while her much-needed vacation does not seem to be on the verge of materializing, there is a liberating sense of release in the aptly titled “Go.” »